Posted on 15 November, 2014 - Comments Off on Aviation Holidays in Lincolnshire

Lincolnshire has long been associated with military aviation, it is an association that keep bringing visitors to the area year after year, in particular it seems to families for holidays that centre around visits to the numerous air museums and other attractions that exist to cater to the enthusiast or those interested in the history of the wars and the role played by the RAF in them.

The county is synonymous with large open skies and of course certain flatness to the landscape.  This and its easterly location close to the occupied countries of Western Europe and of course Germany itself made it an obvious choice to be home to a number of airfields.   During the war it became known as “Bomber County” and even today in the RAF there is still the term “RAF Lincolnshire”.

The battle Of Britain Memorial Flight Lancaster Bombers in Action

Battle of Britain Memorial Flight
Based at RAF Coningsby the BBMF is likely the best known aviation history attraction, flying at air shows and events all over the country as well as at national events on remembrance day and other noteworthy events.  There is now a permanent visitors centre at the base allowing visitors access to the story and history of the aircraft, you can even book a guided tour of the hangar most days.
http://www.lincolnshire.gov.uk/visiting/museums/battle-of-britain-memorial-flight/ 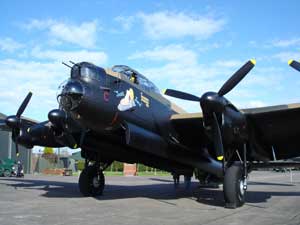 The star of the show is undoubtedly the centre’s Lancaster bomber “Just Jane” which you can see taxying on the original airfield and you can even get a ride in the Lancaster, a terrific experience for anyone.
http://www.lincsaviation.co.uk/

RAF Woodhall Spa
Although the airfield itself has now been quarried away the village still proudly displays the memorials to the men and women that served there via the Dambusters memorial and the 617 squadron memorials.  The Petwood hotel in the village which was used as the officers’ mess also gets a lot of visitors to the Squadron bar which has a large number of 617 squadron photographs and memorabilia.
http://www.woodhallspa.org/heritage_aviation.html provides more information on what’s in the village.

Thorpe Camp Visitors Centre
Thorpe Camp was part of RAF Woodhall Spa and now is home to a visitor centre housing displays commemorating the squadrons that flew from there and so much more.  The opening days and times can be found on the website as it is not open every day at the moment.  The camp also plays host to the 1940’s weekend event which is an event displaying historic military and civilian vehicles and life in the forties,  more can be found at the website.
http://www.thorpecamp.org/
http://www.1940weekend.co.uk/

The spectacular 7-hour flying display features the fabulous Red Arrows, the Battle of Britain Memorial Flight and many more military and civilian aircraft from the UK and abroad. Ground displays include 2 exhibition hangars, funfair, classic cars display, pleasure flying and much more.
http://www.waddingtonairshow.co.uk/ 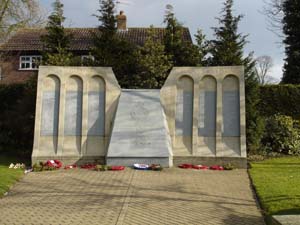 The Dambusters Memorial in Woodhall Spa

RAF Scampton Heritage Centre
Housed in one of the original WW2 hangers and contains over 1500 artefacts The RAF Scampton Heritage Centre is of interest to all aviation enthusiasts.  Containing history from Pre War, through to the Red Arrows of today it is a great experience.  See website for details of how to book.
http://www.raf.mod.uk/rafscampton/aboutus/rafscamptonheritagecentre.cfm

Newark Air Museum
A little further afield you will find Newark Air Museum, one of the UK’s largest aviation museums it has a diverse collection of aircraft and cockpit sections from all aviation periods.  Of the aircraft on display at least 34 are significant aircraft and 21 are Noteworthy aircraft as listed in the National Aviation Heritage Register plus 13 National benchmark aircraft.

In addition to the aircraft the museum displays a diverse display of aviation artefacts and a collection of more than thirty aero engines.  More information can be found on their website.
http://www.newarkairmuseum.org/

Meridian Retreats holiday accommodation is ideally suited both in location and the groups we can accommodate for aviation breaks.  Being located very close to a number of attractions and places of interest for anyone with an interest in aviation past or present means families can have a great holiday while keeping everyone happy.   It’s not just aviation attractions; see our places of interest page for some other local places to visit during your stay.